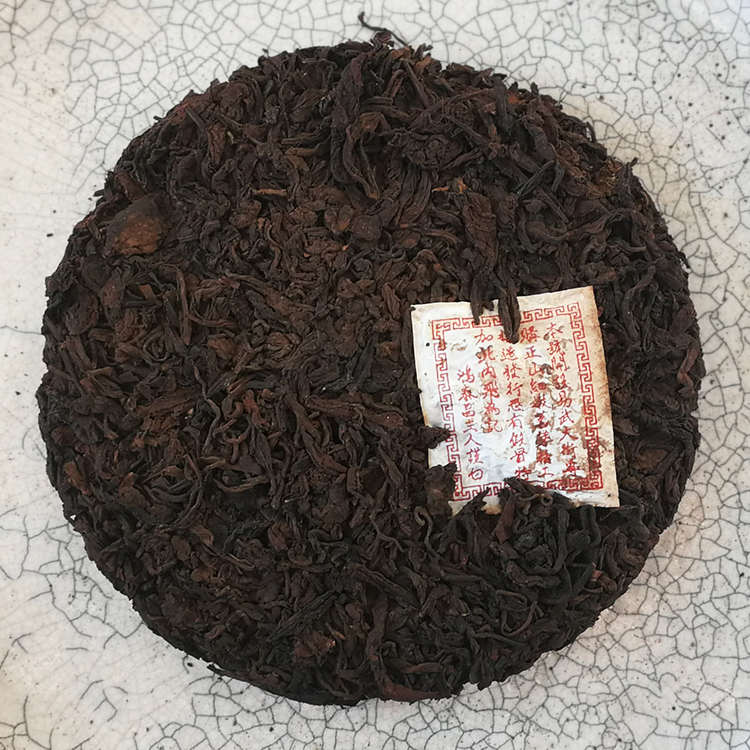 The Dao Jiang Zhong number 2 is a rare and excellent 25 years old artisan fermented puerh, of which only 168 numbered cakes are available. It was fermented according to old artisanal methods inherited from China and then adapted in Thailand. Its 25 years of natural maturation have given it a unique character with touches that can resemble some ancient puerh or liu bao.

Tasting notes
An exceptional 25 years old artisanally fermented puerh. It is both fluid in the mouth and without any heaviness thanks to a moderate fermentation, and very rich at the aromatic level, with a beautiful variety of weathered woods, oak, sandalwood, but also nuts, dry fruit, and nice notes of incense. But above all, we immediately find the charm of dark mature teas, with notes reminiscent of very old Liu Bao Cha.

About Dao Jian Zhong collection
Dao Jian Zhong was born in 1930 in the Pu’Er region of Yunnan. During his life, he would witness the end of the era of the great Chinese puerh producers — something that would mark him forever — followed by the war and the rise of communism. In 1956, he deserted the Chinese army and took refuge in Laos where he lived for almost 20 years before crossing the border with Thailand and settling in the Chiang Mai region. For about twenty years, he would work for the legendary Hong Tai Chang puerh factory, gradually picking up their secret processes and techniques over time. In the 1990s, he would go on to share a number of these techniques with a small tea factory in the region wishing to start producing puerh. When Hong Tai Chang closed, he joined this small factory as the head of puerh production and would work there until his death in 2019.

Dear friends, We currently ship orders to Austria, Bulgaria, Croatia, Czech Republic, Germany, Romania, Slovakia, Slovenia, Hungary, Belgium, Denmark, the Netherlands, Luxembourg, Lithuania, Latvia, Estonia, France, Italy, Spain, Sweden, Switzerland, Serbia, Finland, Norway, Greece, Malta, Ireland, Poland, Portugal, Great Britain, the United States (USA) and Canada. If your country is not on this list, please contact us by e-mail before placing your order. Thank you for your patience and understanding. Take care of yourself and have a good tea! Dismiss